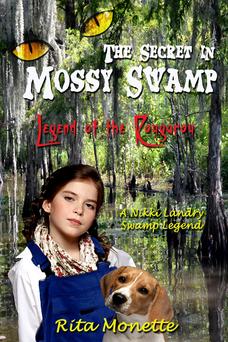 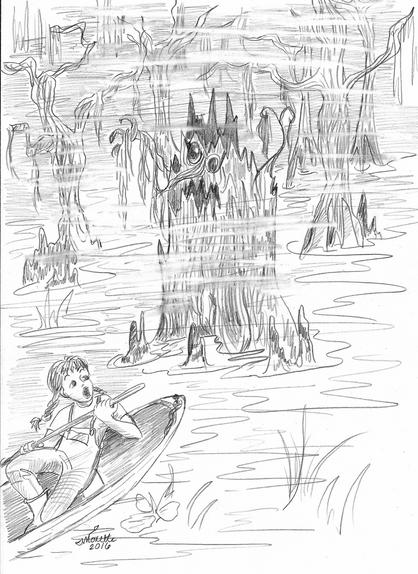 ​The Secret in Mossy Swamp

​​​Things are never what they seem…in a foggy Louisiana swamp

​​Tired  of sharing her room with her pesky brother, eleven-year-old Nikki Landry wishes the legendary swamp creature were not just a myth, but that the dreaded Rougarou would take him away. To escape his childish antics and his destroying her treasures, she plans a tree house getaway where no boys are allowed.

But soon things start disappearing along Bayou Platte, including a young boy from school and her pet turkey. Then “warning signs” of the Rougarou begin showing up. Nikki becomes determined to find out who or what is behind it,  and what secrets lie hidden in Mossy Swamp.

“Where’s Mossy Swamp?”
“It’s a thick swamp—part of the Atchafalaya—down yonder, past the row of islands along Bayou Platte. They began calling it that about twenty years ago…after some, uh…people…spotted a creature out there. They say it was covered in moss, and the legend is—”
Mama slammed a pot down from across the room. It was her way of telling Papa to stop with the scary legend talk.
“Was it the rougarou?” I asked.
I’d heard about that old rougarou ever since I was old enough to walk. Grandpas and other old people would say that if you didn’t behave, the rougarou would get you, or they’d make horrible faces and come after you growling pretending they were the creature. So, because of all that, kids living in the bayous grew up believing in the strange werewolf creature that roamed the swamp, eating up bad children. Then, after you absolutely knew it existed…like an evil Santa…they’d take it back and tell you there’s no such thing.
“No such thing, Tadpole. And whatever they saw, there’s a logical explanation.” Papa winked at me. “But right now I have more important things to worry about. I’ve got a missing kid on my hands. I just hope he didn’t wander into that swamp alone. I gotta run to the sheriff’s office to see if he has anyone that can go and positively identify that pirogue. I hate to tow it in, in case he’s still out there. I’m sort of hoping the boat isn’t his, or if so, it ended up there on its own, because I hate to think of the alternative.”
“Alternative?” I asked, ignoring Mama’s signal.
“There are a lot more dangers in that swamp than a moss-covered creature,” he said.
Moss creature? Something else to keep me awake at night? My papa, who was never scared of anything, had an awful worried look on his face. I guess he was just fretting that the boy might have become gator food. I shuddered, then shrugged it off. I had more important things to worry about myself. I had a tree house to build.